The most powerful tool to transform your limiting money beliefs

Money Mindset Strategy #19 – Transform Your Money Beliefs – is all about taking those pesky beliefs that keep blocking you from making the money you truly desire and transforming them for good.

In this short video I’ll share with you my #1 technique for transforming money beliefs.

Get this Money Mindset Strategy!

To begin, let me give you some examples of Limiting Beliefs that will impact your business financially:

Do any of these resonate with you?

Let me share with you two examples of what happened for my clients when they spent some time really unpacking how their beliefs were impacting the money in their business.

The first client had a fear of visibility. When she started coaching with me she was generating under $3,000/month in sales in her business. During her private coaching session with me at the end of her first month she recognized the root of her own fear of visibility.

She really looked at the impact of that fear on all aspects of her business – how she presents herself, her sales conversations, how she coaches – even in her relationship with her partner and child!

During our coaching session we worked to clear that pattern within her. Less than 24 hours later she closed an $8,000 sale.

Another client saw her pattern of fear of rejection.  She wanted to transition from offering $65 massages to offering healing coaching packages and within the first month of working with me she closed 3 $5,000 coaching packages in one week in her first 3 sales conversations. And she had NEVER sold a high end package before.

That is how that stuff works. And that’s why it’s important to clear our subconscious belief patterns, ESPECIALLY as they relate to our sales process!

Step 1.  Identify a limiting belief that you want to change. I’ve already shared some examples with you.

Step 2.  Determine how that belief limits you. For example, Money doesn’t grow on trees – the belief is, I’ll never be rich. People with money are bad – the belief is I don’t want to be a bad person.

Step 3.  Decide how you would rather be, act, or feel.

Step 4.  Create a turnaround statement that affirms or gives you permission to be, act, or feel this new way.

Step 5. Once you have created a new belief – your turnaround statement – you will need to implant it into your subconscious mind through constant repetition several times a day for a minimum of 30 days.

Get this Money Mindset Strategy!

P.S. Be sure to let me know in the comments your biggest takeaway! (I respond to every comment personally.)

P.P.S. Are you ready to Master Money Now? Go here to get started.

Authenticity = Abundance and here is why…
If you weren’t ashamed of who you are what would be possible? You would be overwhelmed by abundance and your own success. In business, how you feel about yourself has a direct impact on your sales, and therefore your own abundance.

Making this assumption is good for your business!
How many of the people you encounter on a daily basis are you willing to see as prospective clients or customers? Or do you keep wondering where your clients are and constantly bemoan the fact that you can never find people who want to work with you? Your attitude has a significant impact on your ability to attractive prospective clients and customers. 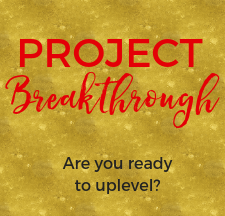